The economic effects of COVID-19 are far-reaching. It affected Canadians of all ages, occupations, locations, and income levels. But, those effects weren’t the same for everyone. As restrictions loosen in Canada, more Canadians will dine out, visit small businesses, and travel. However, it’s important to remember that the economic effects of the virus aren’t anywhere close to complete.

A recent debt survey from MNP Debt highlighted some troubling findings of Canadians’ financial health as of July 2021.

Higher-income households often hold jobs that allow work-from-home, which might explain the discrepancy in higher-income and lower-income debt scenarios. Younger generations also disproportionately faced worsening debt situations, as many took on more debt due to the pandemic.

The widening of the gap between rich and poor isn’t surprising, especially when you consider that Canada’s top billionaires earned an extra $53 billion in 2020. That’s a 28% increase in income.

Has COVID-19 affected you financially? Speak to a credit counsellor now.

Insolvency filings due to the COVID-19 pandemic are through the roof. A whopping 30% of Canadians reported insolvency, according to MNP. This is the highest percentage of insolvent Canadians since 2017. Half of Canadians also reported feeling concerned that they won’t be able to repay their debts.

The high prominence of insolvency is due to Canadians taking on more debt due to lowered interest rates. They made room in their budgets for purchases that they wouldn’t under normal circumstances. This also remains true for the thousands of Canadians reeled in by low-interest rates to take on heavy mortgage debt.

With businesses shuttered and travel paused, many Canadians didn’t spend as much money as they usually do. Though reasons for this vary (either by choice or necessity), Canadians reported having more money at the end of this month (July 2021) than they did in March 2020.

Extra lockdown savings might be the reason why 32% of Canadians are planning to spend more money as the economy opens up. Travel, dining, and entertainment will be new expenses that weren’t budgeted for this past year.

Despite this attitude, experts recommend that Canadians approach new spending with caution, as those in debt are particularly vulnerable and might experience greater financial stress if they rush into spending again.

It’s also possible that as Canadians go back to work, they might struggle financially with their creditors. Government financial support like the CRB isn’t eligible for wage garnishment. So, creditors couldn’t access that income as debt repayment. However, creditors can garnish your wages.

Since unemployment meant no wage garnishment for creditors, those returning to work with debt might experience increased pressure from debt collectors.

The economic effects of Covid-19 affect families in different ways. While people have noticed more money in the bank accounts at the end of the month lately, insolvency filings are rampant and will likely continue as creditors come collecting.

If you’re experiencing insolvency or you’re nearing bankruptcy, help is available to you. Speak to a credit counsellor today and call (844)-402-3073. 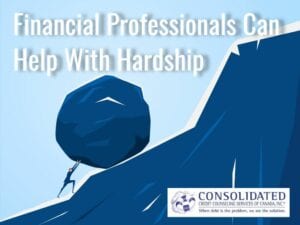 Protecting Your Finances During COVID-19